The developments that have now seen Maj Gen Grace Birungi as new CMI chief come only four days after commander of Land forces Lt Gen Muhoozi held talks with Rwandan leader Maj Gen Paul Kagame.
Reports suggest Rwanda views Kandiho as antagoniser of their country. Kandiho who has now been sent to South Sudan as a military advisor has not commented.
However Muhoozi congulaculated Kandiho on new assignment.
“I congratulate both Maj.General Abel Kandiho and Maj.General James Birungi on their new appointments. Hongera sana” 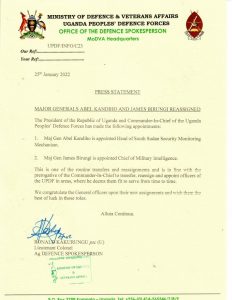 Do you want to share a story, comment or opinion regarding this story or others, Email us at newsdayuganda@gmail.com Tel/WhatsApp........0726054858

Fuel shortage crisis: President Museveni should now do the needful.