And the entire village, Kaliiro, Viila, Lwengo was paralysed on arrival of Babanja who arrived in a helicopter. Proter Balaamu Baruhagare was also I'm attendance.

KALUNGU- UGANDA/ NEWSDAY: The Prime Minister Robina Nabbanja, two cabinet ministers and a junior minister, three brigadier generals and a number of Members of Parliament in a rare appearance witnessed Sisimuka Uganda Founder & Chairman, Council for Abavandimwe Frank Gashumba as he was enthroned the heir of his father on Saturday.

But even as his father lies dead, three years now, Gashumba did not stand over his mentor’s deeds while he lived on Earth. Gashumba praised the late Col Antonio Kasumba’s for political tolorence.

“He was very loyal NRM Cadre and a Museveni diehard. But he tolerated me as a staunch supporter of Col. Kiiza Besigye. And Besigye came to visit him when he was sick at Nsambya,” Gashumba said and praised government officials who attended for not forgetting their colleague cadre.

” You are here, and it is a rare move for the NRM to remember it’s fallen members, but because you recognize his love and contribution to this nation, you trekked long distances and here you are. I thank you”, Gashumba said in his remarks.

Frank Gashumba on Oulanya: Selfness is good but priotise own health and family

He asked the Prime Minister to ensure people in Kalungu are supplied with piped water and also have a critical conection road; Nyendo-Gomba tarmacked.

In front of him in the tents raised to accommodate at least well over 1000 guests who attended were Ministers for defense and Justice and Constitutional affairs, Vicent Ssempijja and Norbert Mao respectively. And the entire village, Kaliiro, Viila, Lwengo was paralysed on arrival of Babanja who arrived in a helicopter. Earlier, Pastor Bugingo Aloysius had arrived.

Nabbanja promised she would front the demands of connecting piped water and tarmacking the Nyendo-Gomba road. She donated Shs.20 million towards the completion of a local church. This money will be picked from her office on Thursday. 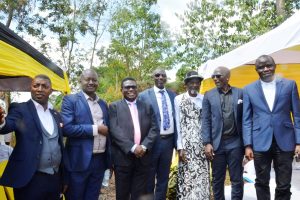 Do you want to share a story, comment or opinion regarding this story or others, Email us at newsdayuganda@gmail.com Tel/WhatsApp........0726054858